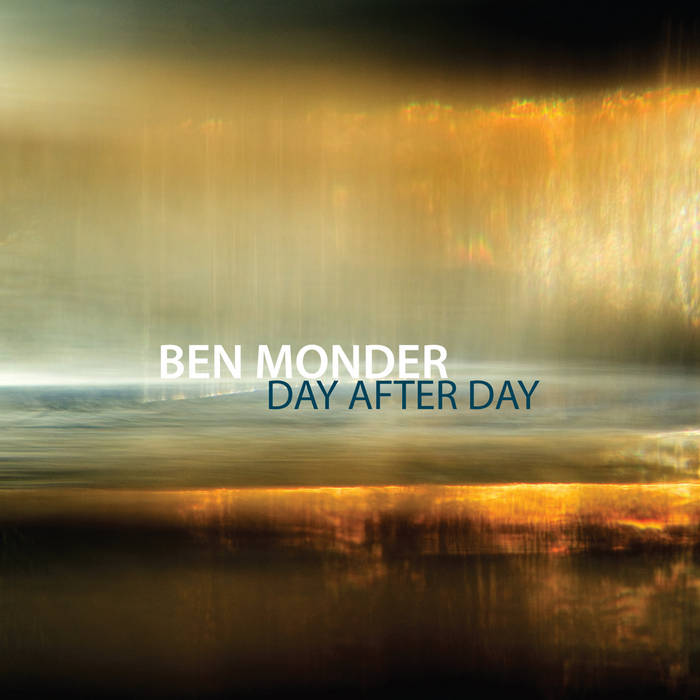 Carlos Ibanez Beautiful, haunting, magic first disk. But Monder is unrecognizable in the second. A drummer appears and disrupts the spell sounding more mechanical than the drum machine from the Casio organs from the 70s. Hope Monder stays away from cheap country-western in the future.

considermemilesdavis Fantastic from top to bottom. Great to hear Ben in both solo and trio formats.

Jeff Kliment A massive dose of guitar goodness from one of the masters. So much to enjoy in this sprawling set. Thank you to everyone involved.

Creating a distinctive voice and approach on a musical instrument is as difficult as it is rare. Guitarist Ben Monder has long been admired for his personal sound, remarkable command of the guitar, and stylistic versatility. His new recording, Day After Day (a two disc set), provides a look at two distinct sides of his artistic nature, the highly analytical, structural side and the more freely improvisational side, through a series of interpretations of cover material.

The idea of presenting a collection of arrangements of other composers’ works had long been a goal for Monder, but one that until now had not been realized. In 2014, he was awarded a grant from The Shifting Foundation, and saw this as an opportunity to finally pursue this vision. For a few months he sequestered himself in an apartment in Saugerties, New York, and began the process of writing the arrangements that would ultimately find their way onto this release. Most of the selections are tunes dear to his heart, many taken from records he listened to in childhood.

Monder eventually enlisted longtime friend and collaborator Patrick Zimmerli to act as a sounding board and performance coach for the development of the solo material, and his help turned out to be invaluable, as was his accepting a producer’s role in the recording studio later on. These pieces, beautifully recorded by Joseph Branciforte in April of 2018, would become the first disc of Day After Day.

To round out and balance the project, Monder convened his favorite trio, including bassist Matt Brewer and drummer Ted Poor, at a session at Brooklyn Recording where they spent two days in October 2017 recording a variety of old pop tunes with the aid of master engineer James Farber. Monder would subsequently pare these down to eight pieces, which are presented on the second disc.

The program begins with elaborately worked pieces for solo guitar. Monder’s expansive take on Johnny Mandel and Johnny Mercer’s “Emily” takes inspiration from the late guitar great Jimmy Wyble’s approach to counterpoint and two-line improvisation. David Breskin of the Shifting Foundation suggested covering Burt Bacharach’s poignant war protest song, “The Windows of the World,” which Monder morphs into a quietly, tortured tone poem before recapitulating into the familiar melody. Quincy Jones’s “The Midnight Sun Will Never Set,” a longtime favorite, is performed here with a spare and meditative loveliness. “O Sacrum Convivium,” the choral work by Olivier Messiaen, is given a very straightforward, but deeply expressive, treatment for guitar, and the other standards are similarly meticulously arranged.

The disc of trio material from the earlier recording session follows as an effective contrast. It is a document of the way the group approaches live music making, with loose, spontaneous interpretations. Ben’s longtime love of the music of Jimmy Webb is represented here by an inventive take on the hit “Galveston”(popularized by Glen Campbell). His acoustic prowess is also on display, in such vehicles as the lesser-known Fleetwood Mac song “Dust” or Bob Dylan’s “Just Like a Woman” (which seems to emanate more from the Joe Cocker cover than the original). The Beatles tune “Long, Long, Long” gives Ben a chance to engage in some magical interplay with Poor, and a quasi-metal version of John Barry’s “Goldfinger” shows the trio’s more raucous side. Finally we have the cosmically abstract improvisation on the 1971 hit by the group Badfinger, “Day after Day,” which brings the set to a fitting close.

Ben Monder continues to broaden and expand his musical palette. Day After Day allows listeners to hear his ever-evolving language in a variety of contexts, displaying the many sides of this highly individual and important musical voice.